You might recall that while we were all in the UK for the Halloween party, Eric spotted these Hector clones and posted their photo (thanks). 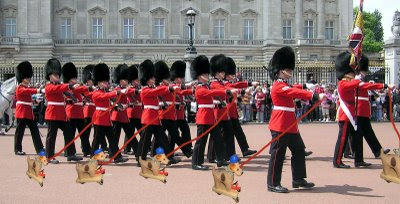 I'm not sure where they all came from, but somehow they managed to stow away on Aire Ruby and they've been taking over Mango's estate and generally driving everybody crazy.
These clones are into everything! Plus, they appear to be multiplying. A bunch of them had some kind of wheelie slumber party in the big bed and messed it all up. 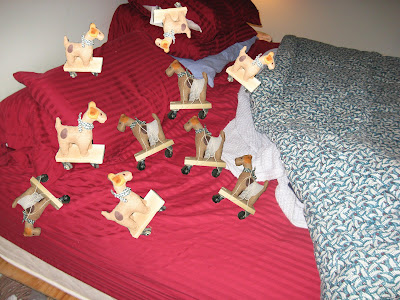 They're also running in gangs, so you can never get them all in one place at once. This bunch isn't too bright... 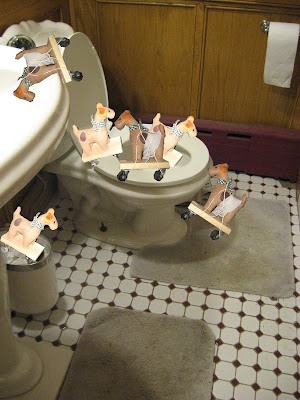 While this clever crew came dangerously close to ransacking the people's goodie cabinet.

Poor Mango is beside himself. He can barely get around the house without tripping over them. 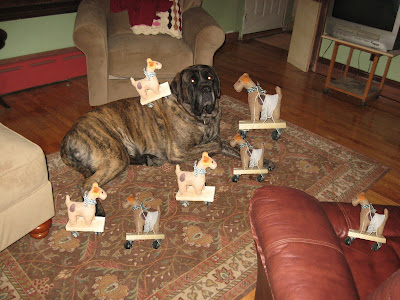 Even Dexter is getting harassed. They wouldn't let him near his new stuffie. 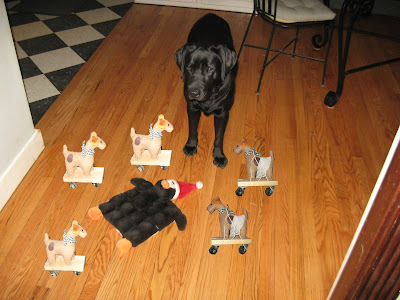 As for me, I'm hiding out on the bookcase until I can figure out how to convince them to return to wherever they came from (or at least go someplace other than the estate). 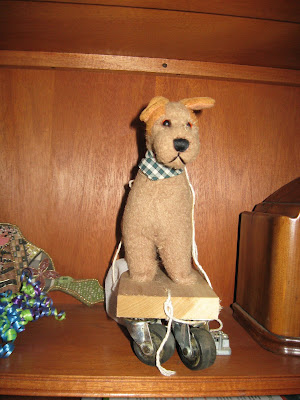 Hector Wheelie. Over and out!

Maybe woo khan lure 'em in with some kind of snakhk?

Hey Dexter!
I'm sorry you've been missing me...My peoples are back from China & I'm very happy...but my mom/secretary can't do my bloggy cuz the internet is stupid...& hopefully it will be fixed tomorrow or the next day..then I can say hi to everypuppy..

I didn't get to see your special pic on the banner...RH must have changed it already...change it back,OK? I wanna see it!

& I saw our special pics of us in London! LOVE THEM! It was funny when you thought the guards were just statues...did you really pee on them?

WHAT the HELL are those things? Want the akitas to come and rip 'em up? LOL!

Hector
Aw you saying you'we not the fathew of all those wheelies???
I'm vewy suspicious..I think you should take cawe of them , and maybe teach them some mannews
.smoochie kisses
ASTA

OH Mango , she is indeed BOSSY ! Oh , her gigantic-ness maybe because of her fluffy baby fur !

This is DNA gone wild. They are like that Star Trek episode with those little fuzzy things. How did they get rid of them? Some research is in order.

OMD that's a whole lot of clones! :O Maybe you could make a clone trap?

YIKES! Clone overkill! We need to send these wheelie back where they came from so you guys can get your much needed peace and quiet! One Hector is more than enough!

LOL. Those Clone wheelies reminds me of the movie Gremlins, I hope the wheelies are not as destructive as those Gremlins in the movie.

Oh poor Mango & Dexter. If I were you Hector, I would catch them all in a box & ship them elsewhere far away from home!

Whoa that is way too many clones! pull out a wood chiper and send the stuffies to some WFTs to eat!
Hugs & Snugs
Eduardo the Snuggle Puggle

I really dont know what to say about all that...Maybe i can come chew on them with my super-sharp puppy teeth. It looks brain damaging!

Holey moley, Hector! Where did they all come from? You have even more wheelies than WE do! We're with Khyra...maybe some Hav-A-Heart traps would do the trick.

Hi Hector, those are sure some fancy wheels you have. All my mom gives me to ride on is a cardboard box. I run really fast and jump into it and I slide and slide and slide. Well maybe only one slide. We are going to make a movie if this soon and then I'll be famous.

oh dear... Mango getting tripped up and Dexter getting harassed... this is not good!

We say... chew them all up into tiny pieces!

You have a clone infestation!! There's that story about the guy that played a flute to get the rats to follow him out of town. You guys should try some instruments to see if they'll follow it. I'm not sure where you would make them follow too though.
Good Luck!
Kaos

oh my goodness... it sounds like gremlins that have had water splashed on them or tribbles from star trek.. what would captain kirk do? Maybe Captain Mango can transport them back from whence they came.

Perhaps you can dispatch them to the North Pool to help with Christmas toy preparations??

Hi guys!! Soooo sorry I haven't been by to say hello and give your page some love.. mommy is slacker and says she's been busy and no time to let me blog.. I guess I can't complain though since she does take me to the park every day! woof!