Today was the day for our holiday photo shoot and let's just say it did not go as expected. If I had known what was involved, maybe I wouldn't have volunteered for the big card exchange. First, we had to put on our outfits. I got these cool antlers. 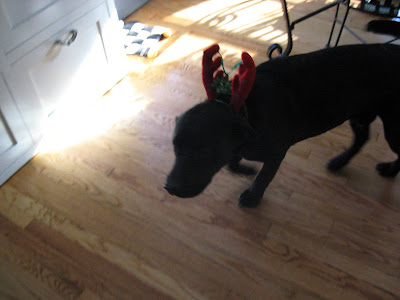 The Relentlessly Huge started out with this Santa hat. 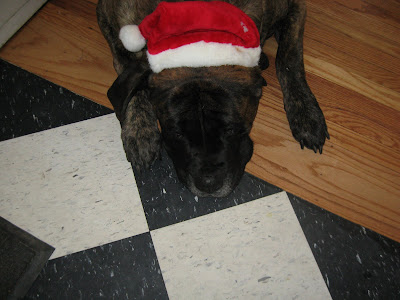 But that didn't last too long. Its a HAT you big dope! 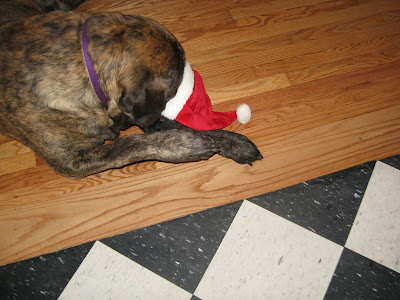 Next, Momma had the bright idea that she would put a cape on him. You can see that I am staying in the background lest she find a cape for me. I was happy with my antlers. 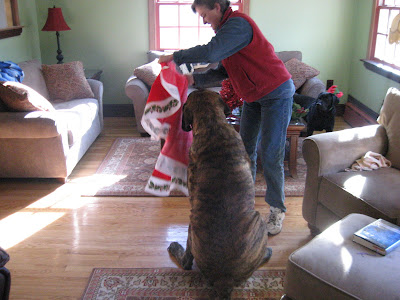 At this point, there were cookies involved (see me speeding in for for some foodables from the left). But RH decided this was the way he wanted to sit and, well, once that big butt hits the floor... 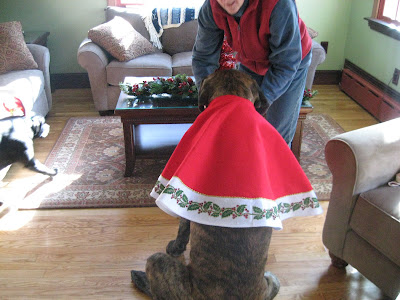 I think the cape looks good on him. Problem is that when the yummers came out, Mango thought it meant it was time to do his dancing moves (which do not include sitting still). He even kept trying to get on the table (because one of his moves is to touch things with his footies). 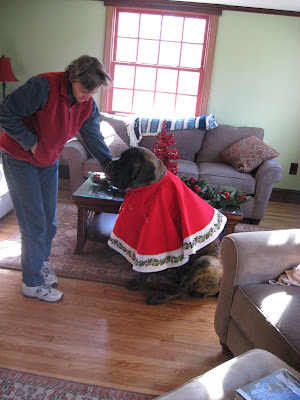 Then he got stuck behind the table. I had to turn my head to avoid being gassed to death. 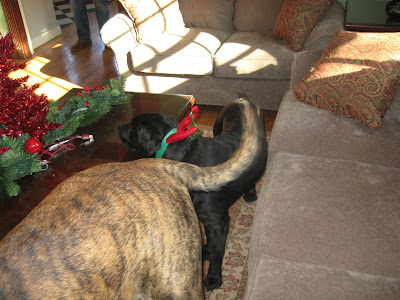 Somewhere along the way he lost his cape, and by now we were both on the wrong side of the table, and Momma was starting to get a bit frustrated. 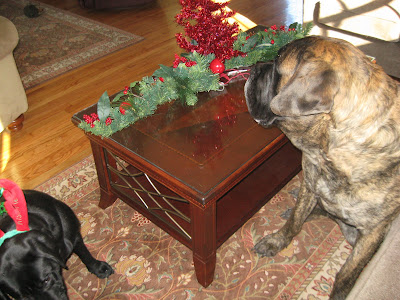 The mental exercise required wore the big guy out and he declared our photo shoot done. 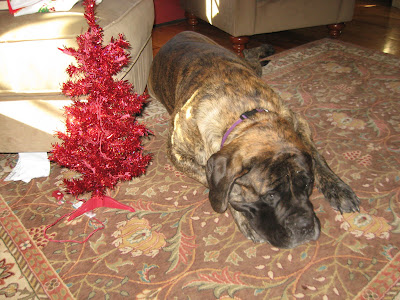 Oh well, here I am looking very charming with my antlers. They have built in mistletoe, you know (Randi) and you can't read them in this photo, but they even say "kiss me." 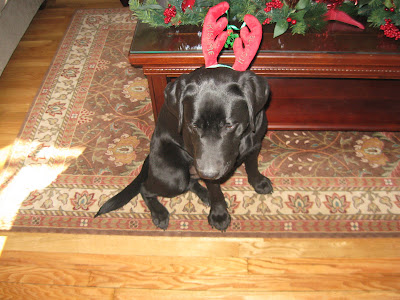 So, when you get our holiday card, just remember that its the thought that counts...
Dexter done!

HAHAHA!! Poor Mango!! He looks, as Scooter says, "exhaustimated"!
We still do NOT have our photos....
I have never used my teeth, but if Mom does not get a move on..well drastic times call for drastic measures!
Hugs
Sunny

I've photoshopped it in my pretty Siber head and woo two looked furry festive and handsome!

Hi, Dexter!
I can't wait so see the result of that photo shoot!
The one my mom used for my cards is the only one she could get!
I hope you had a great weekend
Kisses and hugs
Lorenza

LOL. This is why my Momma is being a scrooge and not doing any holiday card exchange. you look pretty cool, Dexter, in your antlers, and Mango looks good in his cape!

We're going to put up our BrrrMont tree soon. This year Momma's going to try ornaments AND lights.

Nancy at the Farm said...

BOL! Mum decided to wait on our picture after looking at your circus! BOL! She says your Mum got off light; the last time she tried dressing us up we got into a fight and had to be separated. We are reading the blog to her so she can understand that we need cookies to sit through this event.

w00f's Mango and Dexter, heehee way to go on co operating fur picksurs..mama put mine off till tomorrow..

We can't wait to get your card! We're going to be smiling as soon as we see your return address even before we even open the envelope! You guys are just too funny!

BOL, BOL, BOL!!! that was funny guys!! ya know Dexter.. it's the holiday season and you are one handsome fellow.. why don't you bring that mistletoe this away.. :) Woof Woof!

Looks like the photo shoot had a few rough spots...

My photo shoot hasn't even happened yet...My Mom is still looking for my outfit...

I think mine are gonna end up Easter Cards...

I had no idea that these photo shoots are so much work. We are going to do ours this week and I can imagine that many HBO words will be said since I don't like to sit still and I refuse to wear a costume.

Looking forward to the finished product.

Photo shoots are always long and exhaustimating but the final picture is worth it. We're still working on ours.

PL2 is crying she is laughing so hard but we see nothing funny in your post..I mean having to wear a CAPE and amtlers???? Love A+A

He he he, Mom says this is just about how every animal photo shoot goes. I love that Mango is so set in his ways and does what he wants to do!!! That's just how I am! He he he!!!! Can't wait to see the final picture!

Oh Dexter...Your momma & my mama were on the same wavelength this weekend...I had my photo shoot yesterday...it took HOURS & LOTS OF TREATS...but we selected a photo that you will want to frame...

I think that cape looks great on RH...but maybe it would be better if it had "WIDE LOAD" written on the back...

I do see the Kiss Me letters on your antlers...so very cute...I have good eyesight cuz I eat so many carrots, so I'm hoping that not all the other girls see the kiss me sign...I may have competition!

Hahaha... We've taken (attempted) holiday pix too, and will be showing them eventually!

Photo taking session can be really tiring. For both the model and the photographer. I hope you have fun!

Haa. what a photoshoot. I bet you doggies will look pawsome in the photos

We have missed this Xmas Card exchange thing this year, we will have to take part next year now. Then it will be our turn to wear the antlers. BOL

We didn't do the holiday card exchange this year, because our post office charges us a fortune to mail simple little cards to the US. So I am quite content to see you and Mango behind the scenes.

AWWWWW what a crazy photoshoot! Y'all are so silly!
Hugs & Snugs
Eduardo the Snuggle Puggle

Oh Mango looks good with that cape on. We can't wait to see what is the picture being used on your cards!

Haaaa haaa!! But thank dog Mango wasn't dressed up as Santa. He could get stuck up the chimney.

Hehehehehehe That's funny! Mom hasn't even tried ours yet. If it goes anything like last year, it should be interesting.
Kaos

Poor Mango what was Mom thinking putting a cape on you? We would understand if it was a superman cape!!!

Ya sure have a time gettin' Mango ta co-operate.....does he get tired real fast? He does look debonair in his cape.....hope ya got at least one good picture.....but then just seein' yer both OK should be quite enough....

Looks like our humans both had to work for the cards this year! Good job guys!!!

Boy, looks like your Mom had the same problem as my Mom when she tried to do a photo shoot for our Christmas card...Mango looked very cute in that cape! Hope you get a good photo!

You look good with the antlers. Mango looks better in the buff. Last year my mom thought all the other doggies just sit up and pose. Now the truth is out.

I love both of your shiny noggins! And yes it's the thought that counts, but so does this blog post :-D Rock on!