More Snow and Other Stuff

The big news here in Master Chew Sits is, of course, the snow. And it is quite deep for the Mango. 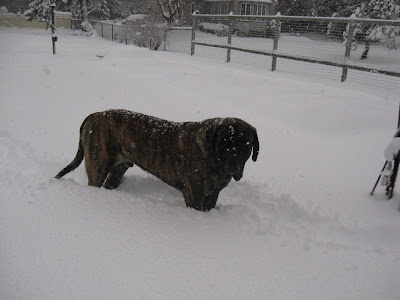 Lucky for me, Momma keeps my pee-pee paths clear. Here I have outlined them for you. The one on the left keeps going to the bird feeder and the basement door and on the right is a path to the barn and one to my patio. These paths are quite convenient for doing one's business as I have tried to point out to the pee-wee who seems a bit put off by the whole thing and has taken to storing his, uh, stuff, until he explodes. 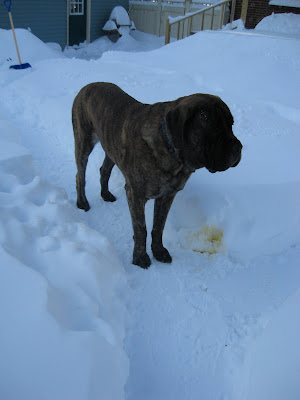 Many of my readers have suggested that I might be able to plow paths on my own. Such nonsense. The Mango is a regal and delicate being, not some common draft animal.
Anyway, the pee-wee does a pretty good job of plowing out subsidiary paths on his own as you can see from this photo. 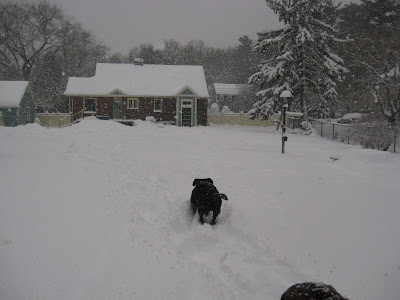 Much to my amusement, it seems that certain zoomie beasts have some difficulty maneuvering when the snow is almost over their pointy heads. So in a game of bitey face, I am able to get some good nips in on his behind as he does his drive bys. 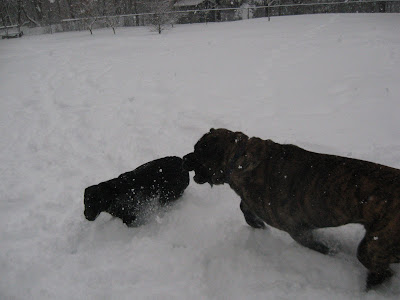 This appears to frustrate the little dickens as you can observe from this attempt to jump on my head and grab my stupendous jowls in his shark mouth. 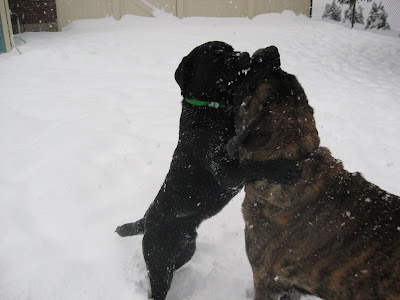 I made a movie of snow bitey face. Momma says I cheated because I grabbed the pee-wee collar. Well, maybe, but it sure is fun to see the little guy squirm.

I want to thank the Master for the fine new stairs he built for me. As you may recall, last year at this time, my observation deck had access only via a narrow and not mastiff friendly set of stairs which frequently frustrated my attempts to mount them. 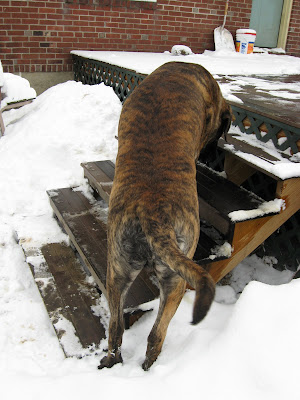 Now I have nice deep big guy stairs with a railing so that I don't feel like I'm in peril of falling off. 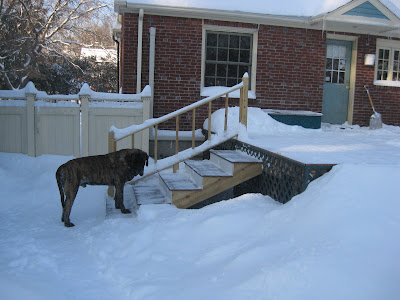 See? No problem. Thanks, Master! 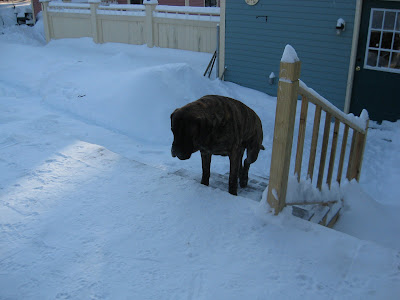 Pee-wee is now officially allowed to sleep on the couch and so Momma bought this doggie throw to put on it and keep off the cooties. 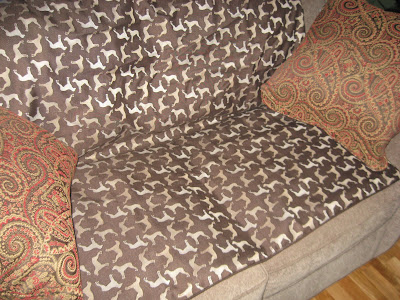 My good friend, the Scruffman, was kind enough to send me a most disturbing photo. 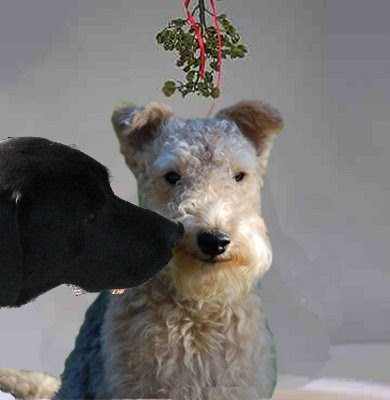 That temptress, Lacie setup herself with some mistletoe and invited all the boyz to give her a smoochie. I was so embarrassed to learn that Dexter had taken her up on the offer. When asked why, all he could say was, "Hey, I'm a guy!" Hello? That's Lacie you have your labralips on! Ewwww!

That fuzzy face is not to my taste. I prefer a gal who can slobber and snore with great gusto, like my wonderful MJ. Here I am snuggling up with her lovely card. 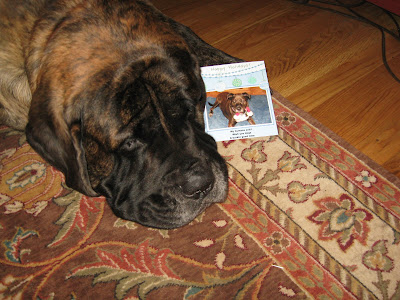 That's it for now.

So, did he shriek like a baby khat or a girrrrrl?

BTW, how much do woo have?

Would like me to bring my FT there and khlear a khourse fur woo?

Hi, Mango!
If I'd live there I'd be covered with the snow!
I loved your video playing with Dexter!
Kisses and hugs
Lorenza

Tell Dexter his smoochin' is wunderbar!!! I was totally impressed for a labraguy and such a young thing that he seemed so um experienced...

Now Mango...MJ is totally your type...I have never slobbered in my short Lakie life...I take that back...ONCE...after anesthesia...Mumsie held a towel to my beardie....but I still sorta droolied all over her sweatshirt...

HAHAHAHAHAHHAAAAAA...I just saw the word verification for this comment....

So how much snow do ya have...you seemed a little rough with the pee wee there...he looked like a worm caught on a hook!!!

I love the snow. Have you tried playing catch or fetch with snowballs? Those are really fun games. Also fun to Save Momma when she pretends to fall down.

That looked like a lot of running for the Mango man. What is up with that?

We love watching your massive self haul it around the estate and while wrasslin' with the labradude! Your master deserves goob smooches of the juiciest order for taking care of our Mango bud, and installing those useful stairs up to the observation deck.

I'm not a bit surprised that Dexter went in for the mistletoe deal with Lacie. He's young, she's a hard-to-resist cutie, and he's practicin' in the hope of some future smoochin' with a pup of his dreams.

You, my friend, enjoy the snow, and thanks for sharing the delicate nature of your constitution. We already knew you were a regal beastie.

Have a Relentlessly Lucsious Christmas!

You guys sure have lots of snow to romp in! We sure wish we could join you! Your dad is the best to take care of his Mango with those awesome steps and handrail!
Merry Christmas! We hope Santa is good to you!

Looks like the deep snow give you a little bit of advantage in the Snow Bitey Face Game...

You were getting some good hops on in that snow Mango!! The labradude seemed totally out of his element!! I can totally see him smooching on Lacie, he is young and naive!

What a great movie, Mango! Academy Award contender for sure. You really kept Dexter moving.
Glad that your dad put in those Mango-friendly steps to your porch. Have fun.

That's a lot of snow! Pretty soon it's going to be taller than you! Your Mom is so nice to keep the paths clear for you.
Merry Christmas!
Kaos

Christmas in New England - Mango has it made!

It looks like you two are having lots of fun in the snow! We don't have any snow, but it was really cold here for two nights and days. Now, it's going back into the 60's. Mom's okay with that, but we prefer it a bit chillier!

Mango, you have great taste. I have a bit of thing for the ole MJ myself.

I am glad we do not have that much snow here. I'm fairly certain that would be above my head.

So that's what yellow snow is!!

Hope you and your family have the bestest Christmas ever!

Mango is a mastiff than can moooove, baybay!

So, when are you asking me out on a date?

(ps: do not show this to Dakotah!)

Oh Mango and Dexter the snow looks fantabulous! I think its a lab thing about holding it in the cold... Apollo refuses to go outside until he absolutely can't hold it any more. He is more of a spring and summer kind of dog... lol

Snow bitey face looks like soooo much fun! I wish I had doggy roommates that would play bitey face with me.

I can't believe that anyone would be so ridiculous as to suggest that the Mango plow his own paths! You are far too regal for such things!

When I get going outside, I plow my own paths, just like Dexter!