Today is supposed to be Dexter day, right? But noooooo, my day was wrecked by the Relentlessly Huge Beastie. He is the most pathetic, manipulative creature that ever walked the face of the earth. To start with, he's still milking Momma for sympathy over his dumb decapitated Santa stuffie by making sad face about having to play with the stuffies that we have left. 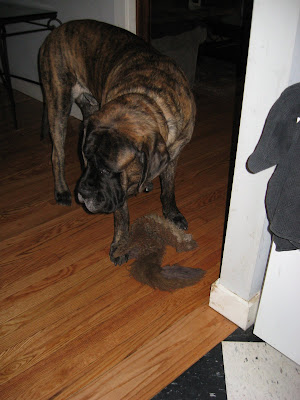 Then he starts telling me about his plan for getting ALL the attention today... 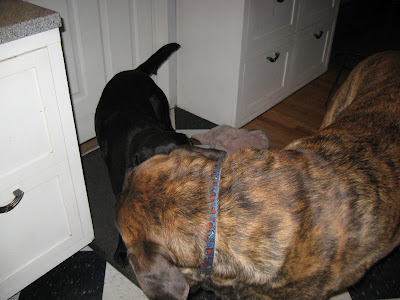 He said he was going to go into the dog cave and cry and cry until Momma paid attention to him and I better stay in the kitchen if I knew what was good for me. 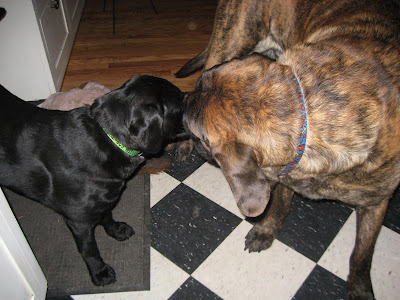 I tried to protest that it was Sunday, which means its Dexter day, but he told me NO WAY! 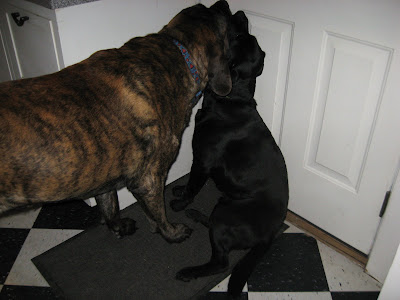 He even pinched my cheeks until I promised to stay in the kitchen while he was up to his evil deeds. I had to acquiesce, I mean he could squish me if he wanted to. 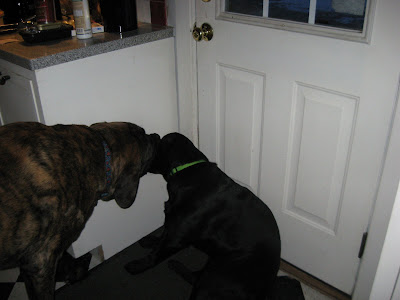 Once he got me to say "uncle" he went into the dog cave all bold as can be and hid his head under the table and cried and stupid Momma fell for it! 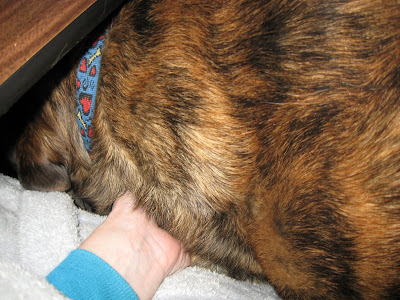 Look at him getting all smoochie face love! What a piggie. 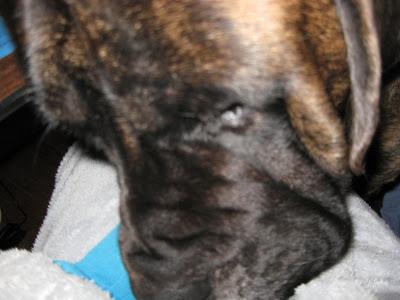 Yeah, he's pretty pleased with himself. So much for Dexter day I guess. 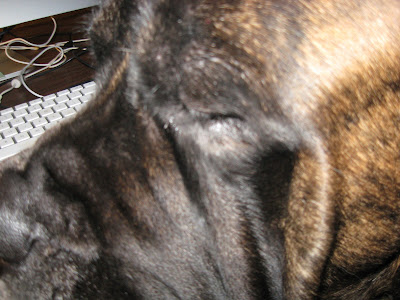 In an act of defiance, I made myself at home on my couch even though the anti-lab blankets were in the washing machine. There! Take that! 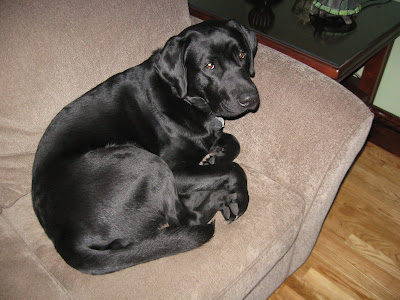 Oh no Poor Dexter. :( Guess that's what big brothers are for. I think I will be mean to my little brother if I ever get one just like the rabbits are mean to me.
~lickies, Ludo

Go Dexter on gettin on the couch without the anti-lab blankie on. I try that all the time too.

That will give them something to think about. As they have to clean your hair off the furniture. It is your day and you should have some privilege.

I guess you showed them...

Dear Dexter...I'm so sorry that Mr. RH has placed all out MANGO MASTIFF RULE over today, what really should be DEXTER DAY...Maybe you can move it to tomorrow...you think he'd allow that?

I'll be thinking of you today, on this RANDAY...which really should be a co DEXTER DAY...

Can't you just get your momma to sym-paw-thize with you as well?

Well litle Dude, you showed him...Ah that crying thing? He may have gotten that from Archie... sorry..Love A+A

Ah, poor Mango. He is still feeling the pain from being banned from the pooter, ya know. Those big dudes are very sensitive, even though they look pretty tough.

Dexter, its been my experience that all giants have weak spots. You just have to find Mango's, thats all. Feeties, ankles, ears, brainal??? Hard to say, but you are still growing aren't you? Start planning revenge right now.

Oh poooor peewee! Glad your mom posted your pic at the end b/c it looked like you might not have any face left after being worked over by RH! I have an Anti-lab blanket on my bed and Moose likes to lie on any part that it is not covering!
p.s. Regardless of signs I will never feel safe letting moose out w/o checking the gates either :-( I am so glad he did not get as far as RH + PeeWee did b/c I don't think he is as worldly and might not have made it!

Hi, Dexter!
Hmmmmmm.... does not look like your best Dexter's Day!
Just give Mango some time to get over losing his Santa!
Kisses and hugs
Lorenza

Not the best Dexter Day, huh? Better start planning on how you can take over Mango day. We send lots of hugs and kisses and scratches and belly rubs your way.

Fuji thinks ya'ss are the funniest 2 guys she's ever met!

Honestly, Dextew, that seems soo unfaiw..I mean RH has all the othew days, and it was just one stuffy..I'm glad you at lest went to sit on the sofa to make you feel bettew
smoochie kisses mostly to you Dextew(Mango aweady got all of youw mom's
love
Asta

Way to stand up for yourself!

Poor Dexter! Woo need to stick up for yourself and bite that HUGE bully on the nose!! Then again, I'm WAAAAAAY over here....and I can say that.

Oh my little Dex! I hope you find some time to have some Dexter Day! I think everyday should be Dexter day! BOL You do look very cute on the couch! Try not to let that big bully push you around... you're little and faster then him! Try to out run him!

We think woo need to put out an APB for a new Santa stuffie for RH - then he will be happy and woo can get Dexter Day. Any idea where it came from?

Way to go Dexter! However, I do the same whiney game with my Mom too and it works! BOL! Maybe if you get him a new Santa stuffie he will leave you alone. ;)

Dexter-
Yeah let Mango think he's king of attention, you'll always get the best seat in the house... or at least a pity party. Guilt works wonders on moms.

PS next time you can call me and I'll come over to distract him.
Norwood

Hi Dexter,
Sorry to hear that you got robbed of your Dexter Day!! Hmmm... seems like Mango does a pretty good job of milking attention from your mom!!

Pssst Mango, we received the awards.. thanks a million!! **puppy kisses from Hershey and a gentlemanly paw-shake from Huskee**

Poor Dexter, I hope your cheeks are not hurting from the pinching..

Poor Dexter! You could try getting even, but you're right...he COULD squish you! Looks like you better just rearrange your Dexter Day schedule!

Agatha thinks Mango go that crying thing from Archie but we're convinced Noah passed it on. He's a big baby too.

i'm with you Dex! A lab is entitled to have his day in court, so why not the Mango man's bloggie?

but we had to admit we fell for the crying too.. its just heartwrenching to see a big guy crumble into a heap of tears.. even if he was only faking it..

i applaud your retort though.. that ought to teach them not to mess with a shedding dog, much more a black one, on a Sunday!

omdog, give the poor Mango Man a break, he worked so hard at Mango Minster and then his santa head was thrown away. That is a lot for a relentlessly huge dude to digest!

You will get your day, Dexter. Don't let Mango on the couch with you!
Fenway