I received a most urgent message from my good pal, Tank, as follows;

THIS IS AN URGENT MESSAGE FOR MANGO. EMERGENCY SITUATION. DOG DOWN. I REPEAT... DOG DOWN. DOZER, COOP & DOTTIE IN DIRE NEED OF AMMO. HELP ASAP. OVER & OUT.

What could I do? What happened to Pee-Wee's suds freedom train? 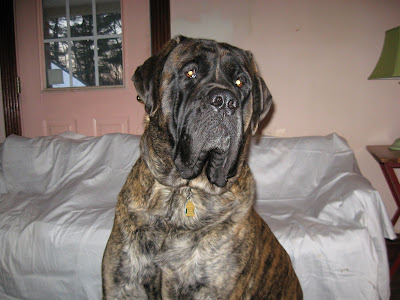 Sadly, the little guy never made it further west than Lake Chochituate where he apparently smashed the Suds Freedom Train in order to fulfill his insatiable need to be wet. 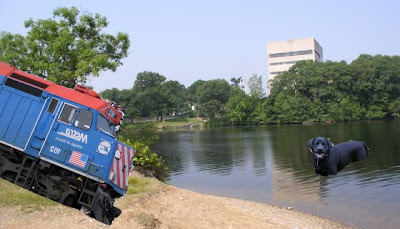 Most fortuitously it was just at this moment that I received some much needed intel from the Lacie Beast. It seems that during her undercover work, she had been able to suss out where the squirrels kept their secret hidey hole. 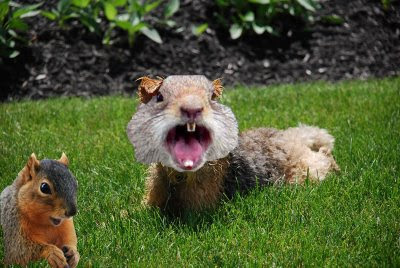 I will say that those squirrels must not be the brightest in the bunch because even in disguise, that screechie voice is difficult to mistake for anything other than a beast. Oh well, guess it worked.

Unbeknowest to me, I had used the secret squirrel hidey hole to do my large and seemingly endless business during my stay in Georgia. 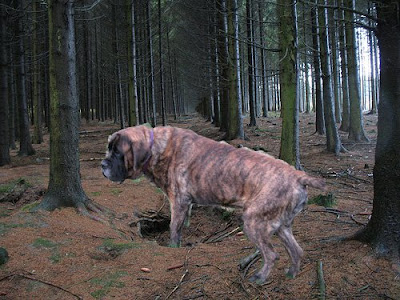 All that remained was for the ever vigilant short legged corgi dogs to keep watch until the squirrels were in their heretofore secret hole. 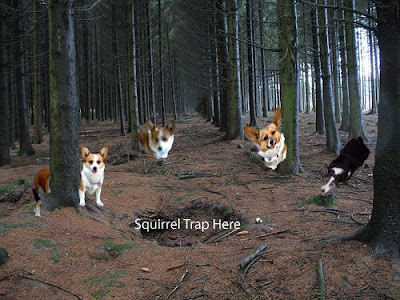 Once secured, Cooper was assigned sentry duty lest they once again escape. 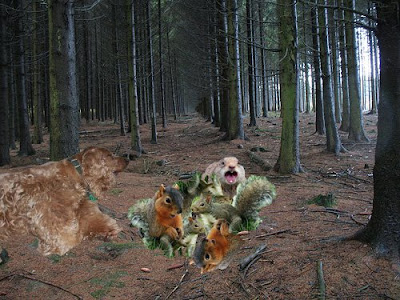 And you know, those squirrels aren't all bad, I mean look at these two little guys playing bitey face. Awwww.... maybe they can be rehabilitated and made into productive members of society. 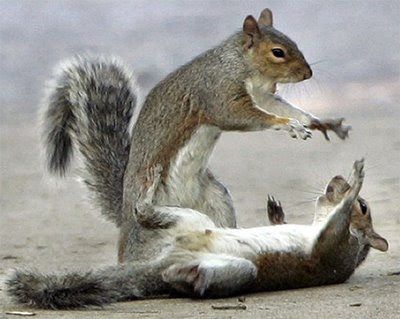 We thinks dat youz gotta look at each squirrel as an individual an' assess da good an' da bad one by one. You are a wise man-dog ta know dat youz can't put all youz squirrels in da same basket.

Mango you need to come on over, we spotted one of those squirrel's yesterday right in our tree. Can you believe the nerve of that guy? Mom got some really good pictures of him..

I offered to khall woo to help with the Suds produkhtion!

Or are woo just watching my videos?

Hugz&Khysses,
Khyra
PeeEssWoo: I khan HEAR the skhreachin' - did woo have to plant that earworm???

Good work Dude! Seems to us maybe those bitey-face squirrels may be too young to have learned many bad habits. THAT may just be the key to fixin this problem, catch 'em young!

Seems I heard my people saying something about some famous guy named Abraham Lincoln saying, “The philosophy of the school room in one generation will be the philosophy of government in the next.”

I gather that means that if you catch 'em young, and train them to believe a specific way, they will lead their "government" that way when they grow up, so maybe you guys have something. Still, they are pretty tasty, so I'm not sure I want to give up hunting the nasty little thieves in this area!

We are so honored that you called on us to help... Any of you that call, we'll be there, but... um, Mango... could you provide gas masks for us next time! I think you might have still had some "liver gas" leftovers... OC & Dott

Oh, I forgot that my Mom said to mention that the first pic you posted in this blog is just a wonderfully, gorgeous picture!!! She said if you showed up looking like that around here, she would try to hug you senseless, cause she knows she wouldn't "break" you!!! I told her you'd probably BITE her!!! OC

We don't think they are playing biteyface. It looks like they are practicing casting spells on each other and you could be next - be careful out there!!

Dexter, I was just reading your PS in a note on my blog and, yes, I will encourage your mom to give you lots of treats because labradogs need treats, especially when they walk very nice on a leash when they are out for a walk with their momma.

It seems the squirrel problem is getting out of control!!! Sorry I have been MIA, but I am all caught up now. =)

That thing of the squirrels is scaring me!
Kisses and hugs
Lorenza

I agree with Martha and Bailey; a world-wide situation that is outta control. It's gonna take more than a few blogging doggies and kitties to get the skwirlly population whacked. (Love the train/Dexter pic - sorry Dexter.) Luckily, with you on the big case, things may just settle down... but maybe not for a while. Good on you Mango!
xo Sammie

Oh Mango Darling...I was delighted to help with my under the covers er undercover work....anytime, my sweet....

We're still at the beachie with the peeps....Mumsie and Daddy were in the pool today when it started rainin' bananas...someone was tossin' 'em off their balconies???!!! Where Mumsie goes, chaos follows....

Barkin' at ya sweet dogs....give my love to Peewee, Mango...

I loved that pic of me in my squirrel outfit!!!!!

Oh...I heard the EPA was notified of the toxic suds spill...your momma may be payin' a hefty fine!!!

You know... I think your right. Look at them play bitey face. Not so bad. Mango put away the arsenal.. I they're here to stay. The suds can be used to put out forest fires.
NOrwood

I bet Tank would disagree about rehabilitation! Don't let the little critters fool you...

oh my, I am too weak to even think about squirrels, they are definitely rabbits in disguise who climb trees..........

Thank you for your leadership Mango, and bringing this dire situation to our attention. Power to the Pooches!

I want to chase squirrels!!!!

Keep up the good work Mango! I'm hoping you are right about the rehabilitation thing.

Mango - I don't know what to say. Have you gone over to the other side?? In military terms, this would be known as a traitor... not good. If you want to "rehabilitate" squirrels, I'm afraid that would mean a dishonorable discharge from OWAS. Please reconsider.

Whooo, Tank's comment sounds very serious. I hope you will decide to be your own dog and follow through with what you see is the right way to manage squirrels.

When my Mom was a kid, about a zillion years ago, she says there was no leash law and dogs could walk around just like people, free and easy. In those days, there were very few squirrels around and we all know why, don't we? Is that the answer, no more leash law?

Mango! Dude! I have the answer. Come see my blog.

LOL.. we hope they can be rehabilitated Mango, our human thinks they are kinda cute. She loves that last pic..hehe

hello mango its dennis the vizsla dog hay i am not shoor those skwirrels are playing bitey fayse i think the wun standing up is sum sort of eevil skwirrel nekromanser wot is raising up an army of zombie skwirrels to tayk over the wurld!!! perhaps this is relayted to the rodent plot i hav ben investigayting on satterdays!!! ok bye

omdog that squirrel lacie is going to give me endless nightmares!! glad the plan worked out, if you rehab one of those squirrels I will trade Tanner for one.