I was told that it was a good thing that I stayed with the Relentlessly Huge when we made our big escape last week because it is unlikely that anybody would have phoned in seeing "just another lab" running loose. Ouch!
I think the real reason we got arrested was that Norwood called the animal cops and told them there was a moose on the loose. I will have to talk to him about that.
My agilities class was cancelled this week, so I had to make due with lame "at home" agilities and since my jumps and poles were put away so that Momma could mow the lawn, she suggested that I just jump over her leg a few times.
Kind of boring if you ask me, but I was up to the task. Apparently, however, her photographic skills were NOT up to it as you can see from this pathetic picture of me levitating over her leg. 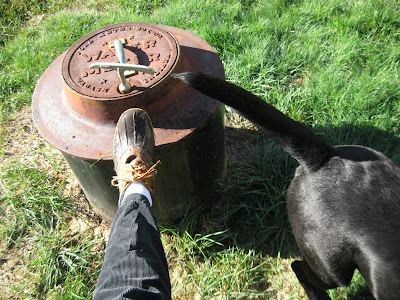 I tried coaching her...
OK, I am going to count to three and then levitate and you take the photo.
Ready? One, two, three! 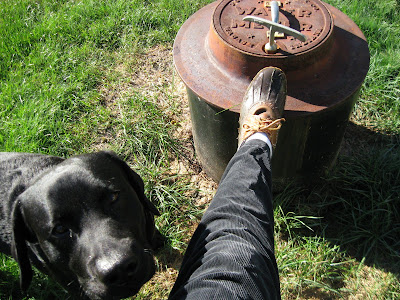 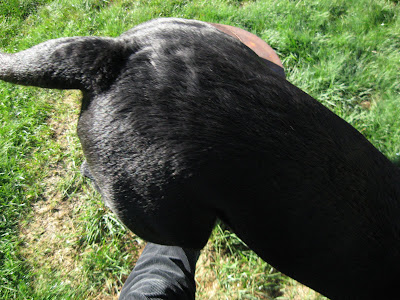 Maybe if we try it from this side. You do know how to count to three, right?
One, two...

THREE!
I am just too fast for her aging reflexes. 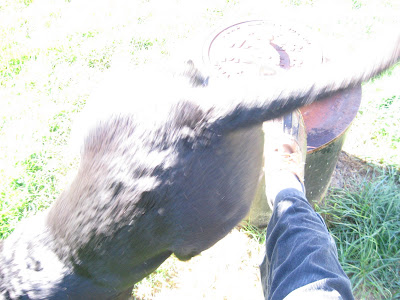 Guess that isn't going to work, how about some tennis ball?
Momma has never had an actual tennis ball retrieving doggie and she is fascinated by my, er, fascination with the tennis ball. Well, duh, I'm a labradude, right? I think that we actually have little tennis balls to play with even when we are still inside our doggie mom's. 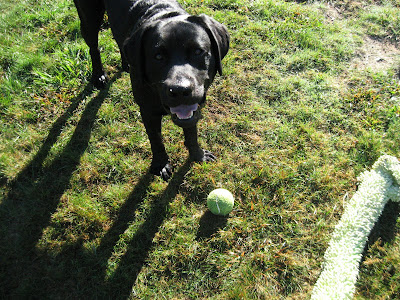 Once again, due to poor reflexes, you will not see my most spectacular moves, but I think I show off my prowess quite well, nevertheless.
Here is my no hind leggies bucking bronco assault. 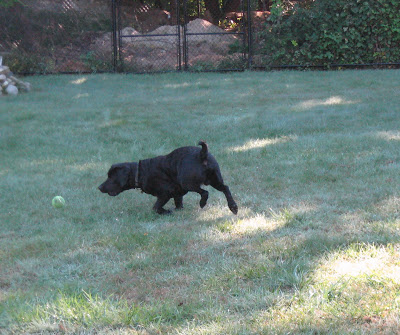 Pouncing! I much prefer to catch it in flight. 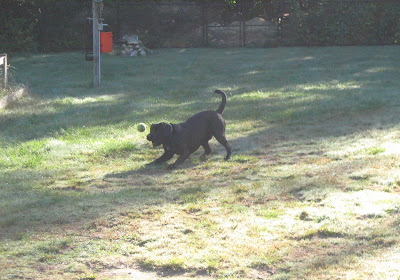 I usually run faster than she can throw, so I need to put the brakes on to wait for the ball to catch up to me. 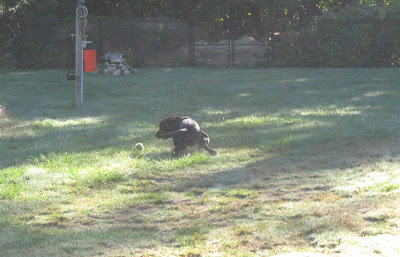 And of course the obligatory return of the ball to momma who is really lazy so I trick her by sometimes dropping it halfway and running back or running right by her or just pretending to let go and then running away and she says, "we'll have to work on that" which doesn't sound like nearly as much fun. 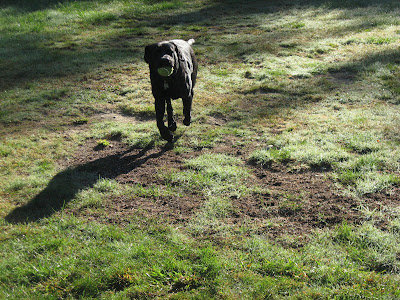 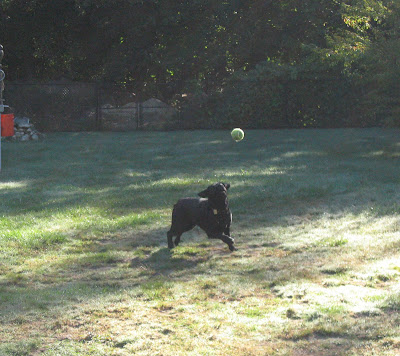 I throw in some of my fancy dance moves just to entertain myself. Check out the crossed legs. 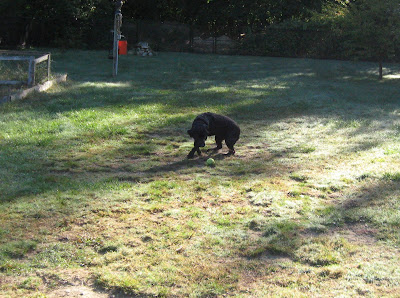 There is always the danger that I will be overly reckless and THIS happens. Ew! He is getting his slobbers all over my tennis ball! 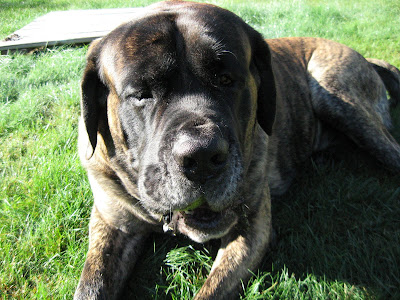 I think it's even so disgusting now that HE doesn't want it in his large and things always falling out mouth.

No worries.
Look what I have. Hehehe. 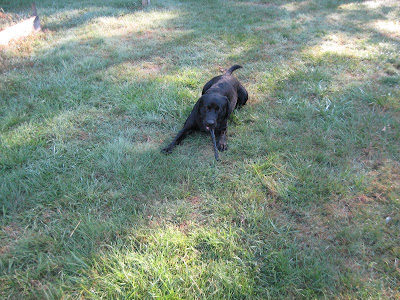 Dexter done!
Posted by Dexter at 7:02 AM

WHOA!!! WE are first!! Srchie say that the tennis ball in your mouth makes it look like a little pea.....And we think that PeeWee is just lightening fast and so you can't get a picture..... I am glad Lacie helped your leggie.....I think..Love A+A

Daxter yer such a dude.

Great photos. With your mom being a little slow with the camera maybe for Christmas or another holiday you could buy her a movie camera. That would show all and not a moment of your wonderful movements would be lost.
Be kind to your mom, from what you said she is older so you must be nice.

Those tennis balls you have before you get out of your doggie mom's tummy are not tennis balls!!! Those are your brothers and sisters. I hope you were nice. ;)

Great post. Don't you just hate the delay on digital cameras? Er . . . I mean the delay in your mom's reflexes? :)

Hey Dexter...or should we say 'Dextrous!'?
Why do you keep showing us your butt when we want to look at Mom's shoes?...mmmm....mezmerizing!
MAXDOG IN SOUTH AFRICA
ps. Say 'Howzit' to Mango for us!

Aw, no agilities? What a sad, sad day.

PS. Mango Momma, I think Marge will be okay waiting around at the trial for a little while, at least. I want to try to enter her into the earliest classes possible, though, because we have to get there around 7 AM and I don't think she'd appreciate waiting all afternoon. We'll see what happens!

Good try mom. Dexter heeler's love tennis balls too. Although the little one is still working on the bringing back think. She usually jacks in and then just leaves it.. Of course Momma's boy walks over and brings it back.
Love your stick Dexter. You make the heeler's proud...

Dexter, you need to leave the adventures in your past ok, no more of that scary nonsense. I don't retrieve, it seems sort of like work almost.

My horse won't get quite as big as the Percherons, but he will be big. :)

Yes, I am totally a cat! The gang I hang with has many good friends that are doggies. I find you all so neat to know and be around. Hope to get to know you better. Thanks for the visit.

Hi Dexter! I must say that I am with you when it comes to bringing the tennis ball back and then dropping it strategically so as to exercise #1!

Your momma never had a tennis ball dog? WOWZA! That is all we've ever had in our house! Too bad Mango gots you's ball all icky but sometimes big brofurs do things like that!

It's always good to have a backup plan!

we think you were arfukky smart sticking with the big guy dexter!

The Army of Four said...

Woo. That tennis ball looks fun. Does it squeak? I have one that squeaks. I love that!
Luv,
DAve

We love watching you run for that ball. Mom might need to get one of those fancy flashy boxes with the sports setting. Since we don't do that much racing after balls, we have not encouraged the Momster to get one yet.

How long did you get to keep the cowmilking thingie before RH confiscated it back?

The Adventures of the LLB Gang said...

Wow Dexter, I all tired just from watching you!!! Where do you get all that energy??!!

Foiled again. I think you might consider retireing that tennis ball!

Wonderful footwork, Dexterman!
Ew! How's Mango getting your tennis ball and slobbing all over it, ew!
Hey guys, I'm back!
Oops, you have not noticed that I have been missing in action lately?
I'm excited to visit all of my friends again.
Love ya!

Very lab of you. Maybe we need one of you around here because our humans keep actually expecting we might bring something back one time. Chuckling.

She still misses them alot -

Dear Dexter,
I have just realised that the more agile you get the more difficult it will be for your Momma to capture your agile form on the camera!

Dexter,
Wow, I so glad to find someone who loves tennis balls as much as I do.
Sally Ann

Hi, Dexter!
Sure you had lots of fun playing with your Mom!
Then Mango took your ball, then you took his cow milking thing... then... what happened next??
Kisses and hugs
Lorenza

Ha Momma the agility pole / photographer. The agility practice, I guess was more for her... Gotta keep old dottie hen at bay. Dexter I agree, you have some nice fetch tactics... the cross over, the Momma tease, the bronco. All classics but no frogger??

Oh BTW that beastly brother being mistaken as a moose was not MY doing... I simply called to report he was in fact domesticated canine.
norwood

Leg jumping? no wonder you broke out for the Great Escape. i saw what Norwood posted about the whole ordeal.. i know where he lives... just so you know.

Dexter, It is fun watching you play with your tennis ball. I have a kind of little mouth so tennis balls don't fit, but I do have smaller balls that I love to play with. Your Mom does some pretty cool aerobics with you both, you should make an fitness tape.

Dexter, you are a real retriever! While I was away last week, my husband tried to play with Cinnamon using a ball. But, she never gives up a ball once she gets it, so she destroyed two tennis balls in one play session with her dad!

Tennis balls are big at our house. Why? Well because they are the only toys left. Everything else - the flea, the chicken, the frog, the weiner dogs - have all been destroyed. But tennis balls have lasted through it all. They are the go to toys! My basset hounds love to fetch them.

I appreciate your moves. I am a lover of tennis balls also. Most just don't understand.

Lots of treats,
Tinkerbell
(Oscar and Tucker too)

Hey Dexter - I totally get the run out for a pass thing before it gets thrown heheh!!! Sometimes I even get hit by the kong - it cracks up the gang at the dog park, but it doesn't hurt too much. Did you ever get hit by the tennis ball? I never had to deal with a slobbered-on kong by an RH though. But I don't think I'd mind. You look super with the stick too!
Hugs xo
Sammie

That was exciting! It sure seemed like a lot of work for your tennis ball!! I'm glad you got it in the end!

You is a very good labradude Dexter! What's this about escaping? I can see I gonna have to read back some!
~lickies, Ludo

Dexter, you are a pawsome labradude! I loved all the pictures though I gotsa agree that you need to work on your momster's photographing abilities... hmmm... maybe mango can be taught new tricks!

First of all. We LOVE your header and can just imagine the head butt that happened right after the camera shutter closed. OUCH! Gnashing teeth!

Secondly. Here's how we have it worked out after reading this post. I, Jake, get the tennis balls. She, Fergi, gets the sticks. (She's happy that way. I am, too. For now.)

You are awesome.
Love ya,
Jake (and Fergi - who found and picked up her first stick yesterday on a walkie)

Hey Dexter - I like to catch the ball in mid-flight too! Although i find it much harder to put on the brakes - sometimes I almost flip over myself! :-)

I love to play with tennis balls, but I don't bring them back to her, I just run and maker her chase me!!