My South African Adventure - The Search for Joey Begins

All photos are by Asta, Lacie, Joey, Petey, and DEXTER!

For today's posting, I, Dexter will be your narrator. The reason will become clear as our story unfolds.


Upon arising from my slumbers, I was greeted by a very touching site. 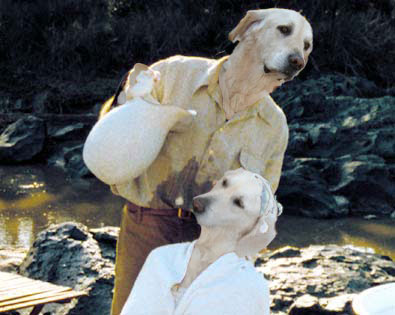 But enough mushy stuff. There is work to be done.

As you might recall, Joey was catapulted into the wild South African countryside via his impressive fart and I knew that our mission was to find and rescue him.

Honey, Miss Kylie and MJ pleaded out of our expedition by saying they would rather listen to Max's mom serenade them on the piano. 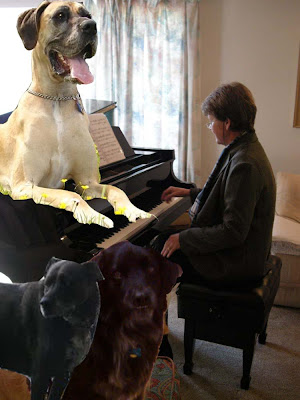 Honey was moved by Max Momma's most extraordinary musical talents to show off some of her famous dance moves. WOW! That is one GREAT Dane! Oh Honey, so limber and graceful. 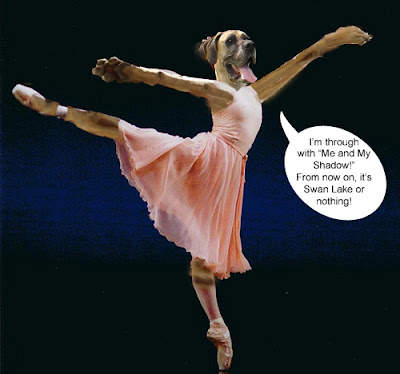 Khyra said she might catch up with us later if she could convince Butterscotch to come down from the tree. 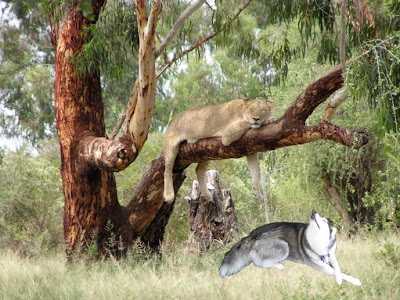 The search for Joey begins!

Almost immediately upon our trek we ran across this most beguiling creature. It reminded me that many of our ancestors crossed the land bridge from Africa years ago. Perhaps this was the original WFT. 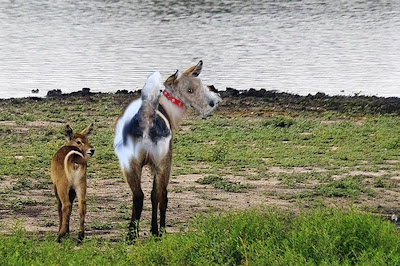 Not soon later (hmm, that seems to be shockingly bad grammar), I realized that the Relentlessly Huge had fallen behind. Since Momma told me to keep an eye on the simple beast or else, I was forced to go back and look for him.

Imagine my horror when I stumbled upon this scene!

The poor fool had confused a passing Rhino for his Darling MJ (easy mistake to make actually given the similarity of their bottoms). 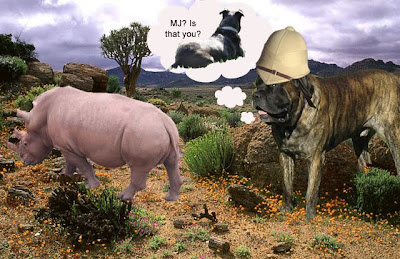 I shouted for help and could hear the others coming, but not before..... oh, I dare not even look. 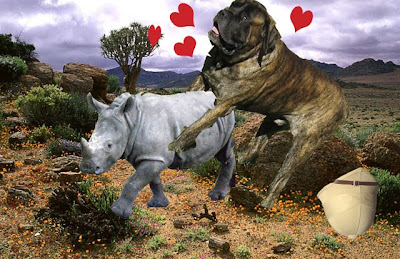 This was a melee into which I dared not venture. Yet how to subdue the lovestruck simpleton?

Little Petey was at my side in an instant with his blow gun. Aha! That will quell his lust.

Unfortunately, Petey, in his enthusiasm to save the day, accidentally inhaled the tranquilizer dart. 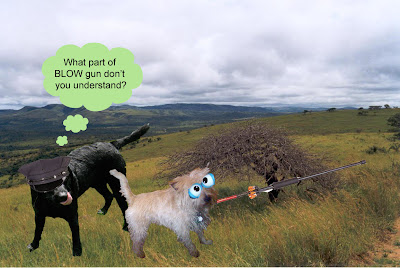 With a shriek to raise the dead, I saw a flash of blue fly by me. Could it be?

Fearless! She was upon the RH in a flash and slammed the tranquilizer into his now love craved self. 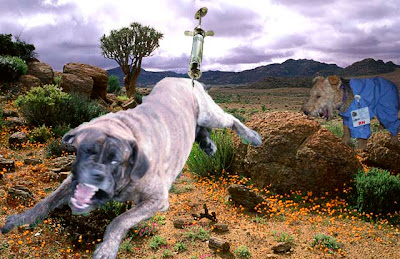 With Mango and Petey out of commission for a while, we were forced to make camp.

Night fell upon us. We were unable to move the RH and so opted to build a campfire and take turns keeping watch over him until morning.

I volunteered for the first watch, along with Stanny and Tanner. Tanner seems to have a fairly cavalier attitude about the potential dangers of being out in the wild. I was on pins and needles, but our watch passed without event. 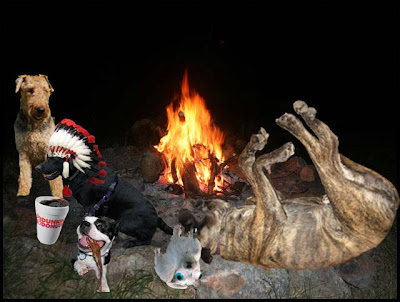 After we retired, Scruffer and Max took over.

That's when things got spooky. 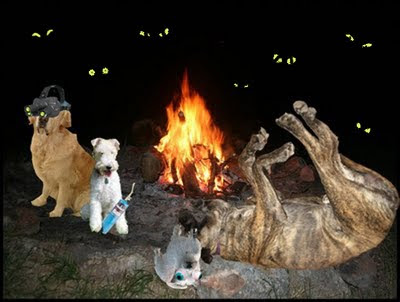 Horrible, unearthly sounds emanating from the darkness. MONSTERS! COMING TO ATTACK US!

We were just doggies. No way to defend ourselves against the wild predators.

Unless... Scruffy, hand over that blowtorch.

Every doggie line up! Even you Asta. Its our only hope. 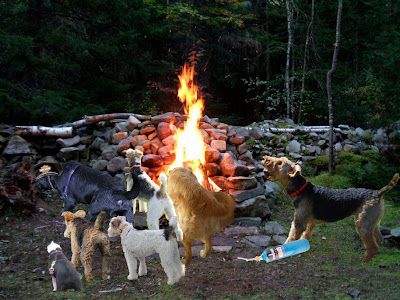 A powerful explosion erupted (guess Asta had a little gas after all), illuminating the night... and... a sight which is seared into my brain for all eternity. A dark gift from South Africa that I will carry with me forever.

Dexter done!
Posted by Dexter at 4:54 AM

Phew! I am exhausted just reading about this adventure to rescue Joe!

And that must have been some faaaaaaart of his to send him so far away.

Enjoying your adventure although so glad I am not actually there, it looks kinda scary!

BOL, enjoying every episode of your escapade to Africa. Love the suspension and unpredictability.

I can't wait to see the babies of Mango and the rhino!

geesh don't let Mango out from the estate yet alone in the wilds of Africa. hey there's that music again.. luv is in the air-everywhere i look around!

hope you're back on track in the next episode. joe's still out there.

Ya know...you are in trouble now Dexter. If Lacie doesn't get ya, DJ will.

Wow you are all certainly having some great adventure.. Those Hyena's look pretty scary...

Well, this is QUITE a development...

Guess all is not so bad see that Joey brought his iPhone is posting he's probably living it up in one of South Africa's Hilton Hotel with room service....Joe is such a MASTERMIND...

I was feeling vewy safe wif you and Scwuff and and babyStan standing guawd by the campfiwe, but that last sight even scawed the be *&#$% out of me..that can't be my BFF Lacie..it must have been an illusion .
Say what you will, but she was thewe in a flash to help out wif Mango (what is the gestation pewiod fow hippos?..I shoowe hope the welentlessly hooge won't have to pay child suppowt)
smoochie kisses
ASTA

Yikes! Who knew Africa could be so scary??

We can't stop oooohing and aaaaahing over Honey! She's just so beautiful and so graceful!
This is really some adventure!

Love ya lots
Maggie and Mitch

What have you done? I am in serious trouble here. You can't be doing those sort of things when white rhino are one of the endangered species. (you have to stick to your own kind...even if you are ticking!)
mmmm...Im gonna loose my licence!

Eish, this is worrying!
MAXDOG IN SOUTH AFRICA

and the plot thickens....

Poor pups. We hope those scary hyenas are kept at bay. They look kinda mutated - like something they ate disagreed with 'em ...

Y'all must be carefull.
Mack

Dexter Darling, You might be wasting your time in those wilds. Joe may well have catapulted himself to the wilds of Canada to be with me.

The more I read about your adventures in Africa... the more worried I feel!
Kisses and hugs
Lorenza

Mango I don't know what to say. Dexter good job taking care of your big brother.

Wow, what an adventure!

Funny pictures Mango! You're a big doggy but I bet you're awfully sweet.

Any doggie who passes gas to get somewhere is a friend of ours!

Our momma thinks that the humans who are helping with this riveting story have brains that are so expanded - expanded by what, she doesn't know, but they are so HUGE to hold alla' that stuff and then spew it onto the innernets for alla' us to see an' to read.

OMD, this adventure is starting to take a very bad turn. Let's all try to get things under control before those Laciehyenas take over.

I had a talk with Butterskhotch Morsel...

Yeah I kind of feel the same way with two adult dogs. I'd feel more comfortable starting a puppy out on it. Wish I hadn't talked myself out of it when I first got Jackal. I've been tossing the idea around for a while, but haven't quite made that step yet. I would like to be able to give the occasional raw thing as supplement, but I've heard it can cause problems feeding raw and kibble together. It's just too much to comprehend lol.

I also feed real, raw bones to the dogs. I always get the weirdest looks when I tell people my dogs chew on cow leg bones. It's the only thing they can't destroy, swallow or choke on!!

I think a raw diet would benefit Storm a lot with her skin allergies and sensitive teeth. Maybe now that we're raising our own chickens and goats I might be able to do it and keep costs low. Since she has a stomach of steel and doesn't eat much I guess I could always try it out on her first. I'll keep track of it on her blog if I decide to do it. :)

Oh Dexter thank you for narrating. You are all so hysterical. Now those wild animals are scary and amusing!
BOL
Benny & Lily

Dextew
I accidently tiped hippos instead of whinos..sheesh..I think the wine dinking in the sun has addled my bwain
smoochie kisses
ASTA

Mango, recognise your loved one correctly! :-)

I guess this is what the Mr. was warning me about when he said no dating intact males. OhMyGosh! I had no idea....I must go in the kitchen and poke my eyeballies out to try and remove THAT picture from my wee little brain. MANGO!!! How could you? She has no fanny furry panty loons, you big LOON head! ewe! gross! Thank goodness Lacie was handy with a RH trank shot. I just hope she was soon enuff. It must have been all that wine you were drinking while lolling about in the sun. I think you need to man up and go find Joey before something really awful happens to him. Laciehyenas indeed!
TTFN
Bonnie

Oh boy.. What an adventure!

Oh my dog! Lacie, you look a little too giddy piking the tranquilizer into Mango!