Before I start, I am supposed to tell you that photoshopping is permitted for entries into Mango's idiotic contest. Speaking of his contest, let me share with you a few of his character traits that he did not post...
I could go on and on, but you get the picture, right? I will just end by saying he is a total cry baby momma's dog big bully farting snoring head butting short attention span can't back up piggy doofus head. So if that describes you then I guess you are just like Mango.
Now, let's focus on ME!
Saturday was kind of a sad day for me because my neighbors declared it close up the cement pond day. I can't be too mad because usually they close it up on Labor Day but they left it open an extra week JUST FOR ME! How cool is that? 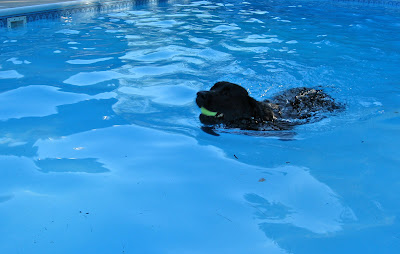 You've seen me swimming before and even though momma can't get enough of it, I don't want to keep showing you the same old photos.
I do want to point out that it is important to know when to rest. However, whatever you do, DO NOT GET OUT OF THE POOL or let the humans get your tennis ball when you are tired because they will send you right home when all you needed to do was catch your breath.
As you can see here, when I am resting I stay on the opposite side of the bannister from momma and make sure my tennis ball is safely out of reach. No way she would be going in after it as the water was only 65 degrees. Hehehe. 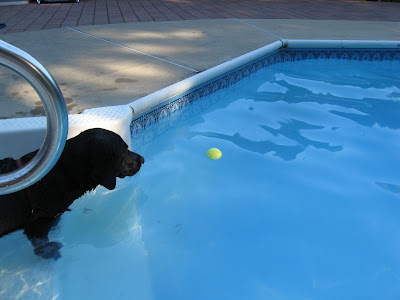 Momma says I am the cutest little lab ever when I do this pose. I would have to agree (although I am actually 77 pounds of solid muscle which isn't all that small). 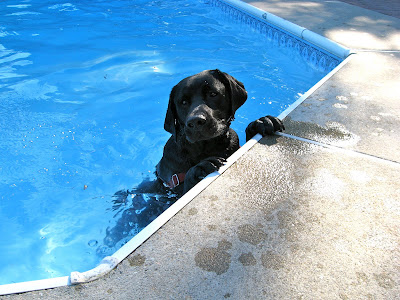 You can watch my last swim movie for 2010 here.
I'll be making due with the RH's giant slobber filled water bowl until winter arrives. 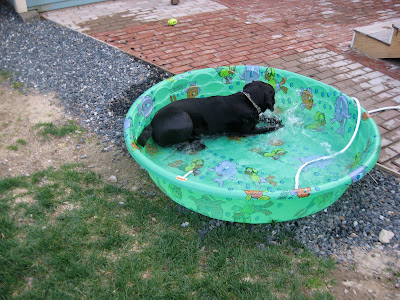 Dexter done!
P.S. Can whoever left me a comment asking about coordinating movie music please leave it again because idiot mom can't find it and she does want to answer your question.
Posted by Dexter at 4:21 AM

Ok, we were NOT the ones who posted the question about how you coordinate movie music, but you are masterful at it. Share the answer on the blog! (Er, and where you get your music from. Since getting our own personal choices blocked by that Evil You Tube, we have started using their choices. Very hard to work with.

Lola and also Franklin, too said...

I know it's sad for a labradude when swimming goes away, but on the other paw, cooler weather is coming. Most labradudes like cooler weather just the same was we Peis do.

Hey, can humans enter the Be Like Mango contest, too? Daddy farts more than Franklin, and certainly more than me. And when it comes to making noises in ones sleep I'd put Blog Mom up against any Mastiff any day.

HEY I think Lola is onto something. My dad's butt barks like a hound with a treed coon. I think YOU should run a contest about .... PHARRRRRRTS
It would be WAAAAAY more entertaining than one about the RH wanna be thingy!!

YEP Dexter's Phaaaaaart FANtasia
would be a grrrreat contest indeed.

Your mom is RIGHT! That piktur of you hanging on da side of cement pond is PRICELESS!!

And my momma likes da Thundering Herd Idea...her would love a class from you in da Movie Maker software! Her thinks your movies are Academy Awards material!!

Your mom is RIGHT! That piktur of you hanging on da side of cement pond is PRICELESS!!

And my momma likes da Thundering Herd Idea...her would love a class from you in da Movie Maker software! Her thinks your movies are Academy Awards material!!

Hee hee! This was one of your most hilarious posts ever!

Dex, you are the cutest little puppy in that pose! And you comments on RH I thought were super hysterical...just don't tell him I thought that, OK?

That was so nice of them to keep the pool open just for you!

After revealing all those sweet things that make Mango a MANgo, I might want to fight The Beastie fur him!

Super post!!! We loved it. Poor Mango - all his "secrets" are out. But you labradude are Furry handsome - we love you posing by hanging on the side of the pool.
M was sure laughing hard.
Happy Tailwags
Ernie,Sasha,Chica

Well, I don't have any lipstick (teehee), but I'm not so keen on backing up, so maybe I'm still okay... Sorry that your cement pond is closed... Our dirt pond is still open (although a little chilly) if you want to come visit... And yes, you look Super Cute hanging on the side of the pool....

PeeEss: We are engaged in shameless self-promotion; if you haven't voted for Abby's Hippobottomus tag and would like to offer your support, we'd love your vote (it's on the right side-bar): http://www.fetchingtags.net/blog/contests/ Thanks!

You do look quite in your element there in the pool, Dex! I hope winter's over before you know it and pool season is back in swing. I do not think I'd care to swim in a slobber bowl!

I guess we are more alike than I thought...BOL.. Our contest entry will be posted tomorrow
Benny & Lily

Momma loves watching you swim and tries to get me to watch so I can take notes. She says every self-respecting labradog should swim like you do and to that I say Whatever... Mango is right, you are a total suckup!
Moose
p.s. Momma does go all smooshy when she sees your pool side photos. She loves the look you have on your face!

That pool rocks. Dexter! I can understand why you are sad that it is closing for the season. I just love those photos!

It sounds like both of you would fit right in at our house. In our pack we have most of those wonderful traits, plus we love to swim. You can both come play in our yard anytime.
Morgan, Tsar and the Porties

Sorry I haven't been to vist lately. But I do love the picture of Dexter at the side of the pool too cute. What a bummer you cement pond has been closed for the season.

Dexter-Dude,
You are one good and most handsome swimmer! Sorry your swim had to end for the season.

Okay, Peewee...Scruffy and Stan here...we just (at the expense of our lives) put up Lacie's entry into the Mango contest. She just doesn't know about it....

As for you, last swim? Can snow be far behind?


You do look pretty lablike in those photos....

Scruffy and Stan who are moving into the lilacked dog cave.

I agree... the RH is a wonderful character with many fantastic traits that he's too modest to boast about himself. Thank you for pointing them all out.

Too bad your pool is closed, but I enjoyed your movie. I went swimming today and was the only little dog to get in the pool by myself to swim! BUT, an unfortunate accident occurred while I was running around outside the pool. Another dog came running at me and we collided. I'm down to 3 good legs and I fear a trip to the VET is in my future:(

I think it's pretty cool that your neighbour opens up the pool for you. How I wish we could have that for Eva to work on her hindlegs!

You are such a natural in the water, Dexter! What a bummer that they're closing up the cement pond!
Mango would hate it at our house. Our mom LOVES to rearrange furniture. She says it's the only way to do a good cleaning job!

Love ya lots
Maggie and Mitch

Sorry about the pool.

We are with the Herd - we all would love to know how to coordinate the music too.

Dexter, you look great in that pool. Your neighbors need to invest in a heater so they could leave it open longer just for you:)

We got some good chuckles out of your list of Mango characteristics, but somehow we think there might be some payback headed your way.

Oh Dextew
Yoou weally awe the cutewest little Labwadoode in that pose..I'm so sowwy that youw pool is getting closed fow the season cause you aw3 the bestest , dawlingest swimmew evew
I wanted to entew the contest, but i don't do any of those things,,sheesh..I feel so unaccomplished
smoochie kisses
ASTA

Dang it. You're gonna have to wait a whole year till the cement pond gets opened back up?
Those facts about Mango were so cool -- and very revealing! I hope he doesn't read this post!

77 lbs eh? oh my. you could totally take loki in a bar fight.

and we're so envious of your swimmings abilities...

Hi, Dexter!
I know how much you like your swimming sesions! But... at least you have your mini pool to enjoy more splashing time until winter comes!
Kisses and hugs
Lorenza

WtF a I wanna be a moose contest? I leave for one week and that is what's going on... ugh.

Hey dex man- momma should know that if you swim that means she doesn't have to walkie you... I guess she hasn't put2 and 2 together.
norwood

hate to say it. i've been a witness to about 1/2 this list. except #1 pulleaaaze nevah let me witness #1! good thang grad skool's outside.

pee es: Let's see what teacher's pet comes up for this one?!!

Hi! You sound pretty fun! I'm also a lab that has a blog--well, I share with my dog-mom Tierra but she makes me do most of the work. She thinks she has a license to be lazy because of what they call "senior" rights. Whatev... anyway. It was nice to meet a fellow waterloving friend. I'll be sniffin' you around!